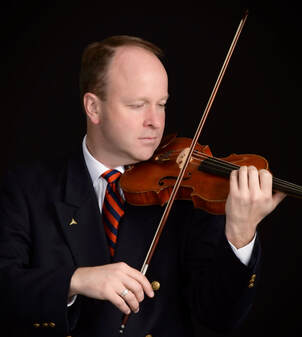 Svend Rønning is Chair of the String Division at Pacific Lutheran University and Professor of Music.

Dr. Rønning is a native of the Pacific Northwest and holds his own undergraduate degree in violin performance from PLU, which he earned in 1989.  He subsequently earned a Master of Music and a Doctor of Musical Arts degree from Yale University.

He is of the most active violinists in the Puget Sound, serving as Concertmaster of Symphony Tacoma, as well as performing frequently as a soloist, recitalist, chamber musician and recording artist.  Dr. Rønning is also Artistic Director of the Second City Chamber Series, Tacoma's award winning producer of chamber music concerts and chamber music educational programs.

Svend Rønning has appeared in venues around the world, including the Aspen, Eastern, Harkness, Jerusalem, Methow, Pacific, Rhode Island, Spoleto and Wintergreen Music Festivals and has served as Concertmaster of various orchestras including the Charlottesville Symphony, the San Jose Symphony, the Spoleto U.S.A. Chamber Orchestra, and the Tacoma Opera Orchestra.  As soloist, he has appeared with numerous orchestras, including the Charlottesville Symphony, the Prague Radio Symphony, Orchestra Seattle, and Symphony Tacoma.  His prior teaching appointments have included faculty positions at the Eastern Music Festival, the Shenandoah Conservatory, and the University of Virginia.

Dr. Rønning's teachers include Syoko Aki, Sidney Harth, Jaap Schröder, and Ann Tremaine.  His own students have gone on to other music programs at Indiana University, Boston University, the North Carolina School for the Arts, Western Washington University, the University of Virginia, the Manhattan School of Music, and the Yale School of Music as well as a Fulbright Fellowship.  Several students now occupy positions in such organizations in leading orchestras around the United States, with some former students active as popular and folk musicians and soloists.  Others teach Music in public and private schools around the country while many others are employed in diverse non-music careers from Film Direction to Law to Medicine.