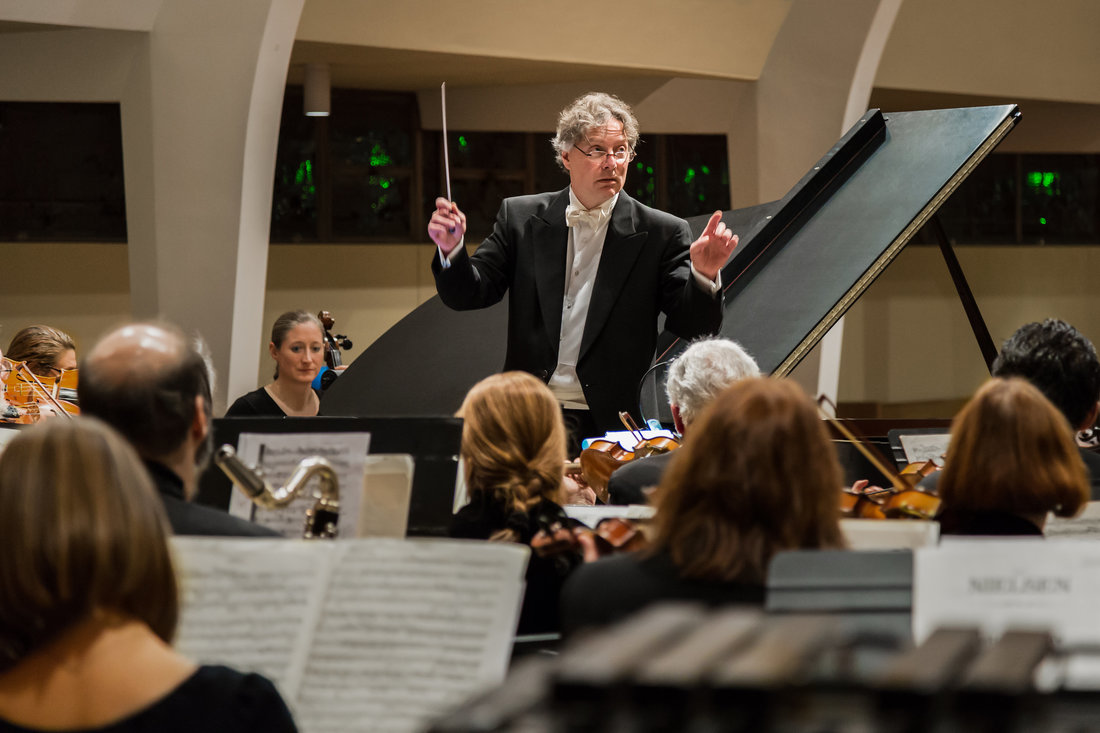 Our Mission
To inspire, enrich, and educate musicians and the community at large through  the performance of outstanding symphonic music.

Governance and Finances
The Thalia Symphony Orchestra is run by a board of directors that includes both orchestra players and non-musicians. The board manages all non-musical aspects of the orchestra (e.g., insurance, corporate registration, promotion, finance, fund-raising, etc.). The board also commissions a Repertoire Committee of musicians to act as a resource for the Music Director for the coming season. The Music Director works with the Repertoire Committee to make final program decisions. Thalia is essentially a volunteer organization. Our sources of income are ticket sales and donations from businesses and individual supporters. We are a 501(c)3 nonprofit organization.

History
The Thalia Symphony Orchestra was founded in 1948, making it one of the oldest community orchestras in Seattle. The name Thalia comes from the muses of ancient Greece. The muse Thalia presided over comedy and lyric poetry. With this inspiration in mind, Thalia Allied Artists was founded in 1949, primarily to produce opera. The name was significant to them as it refers to the great variety of art involved in opera and shows loyalty to the Greco-Roman ideals of artistic excellence. The organization included an orchestra needed to support operatic productions, which they named Thalia Symphony.

Thalia’s first season included Madame Butterfly and Englebert Humperdinck’s short opera Hansel and Gretel. After that season its leaders recognized that full opera productions exceeded their long-term capability, and they reduced their scope to production of the smaller musical theater pieces. Their other offerings ranged from chamber music, choral presentations, and symphonic music to youth and adult education. Their community workshops covered dramatics, poetry writing, music appreciation, singing, and even folk dancing and puppetry.  In time, the orchestra became the centerpiece of TAA’s operations.

Repertoire
Thalia Symphony Orchestra primarily performs music from the late 18th century to the present. We tend to draw on works that call for a modern “full size” orchestra, complete with full brass and large string sound.

Noteworthy Performances
While many orchestras premiere newly written works, TSO takes pride in having premiered works of historical significance that had been unjustly forgotten.
Thalia Scheremetiew Library
At over 950 titles, the Thalia Scheremetiew library is one of the largest private music collections in the Pacific Northwest. The library was named for Mikael Scheremetiew in honor of his intense personal commitment and great foresight in building this collection. He and other members of the orchestra routinely donated sets of music. The library has enabled Thalia Symphony to rehearse and perform an extremely wide range of music.

Maestro White has served as Music Director of the Rainier Symphony and Seattle Civic Light Opera, and Conductor for Seattle Mandolin Orchestra prior to joining Thalia Symphony Orchestra.
Michael Miropolsky, 2013 – 2016
Maestro Miropolsky, the Assistant Principal Second Violin with the Seattle Symphony Orchestra, and our former Music Director and Conductor has served as principal violinist with the Moscow State Symphony, performed with the Radio and Television String Quartet in many countries around the world, and recorded internationally on the Melodia label. He is both the founder and conductor of the Jewish Community Center Chamber Orchestra, conductor of the Northwest School Orchestra in Seattle, served as a faculty member for the University of Puget Sound, founded and conducts the Seattle Conservatory of Music Chamber Orchestra Young Virtuosi, and also currently serves as the Music Director of Cascade Symphony.
Stephen Rogers Radcliffe, 2010 – 2013
Maestro Radcliffe took the helm of the Thalia Symphony beginning with the 2010 – 2011 season, and was instrumental in injecting a new surge of creative energy. The orchestra moved its rehearsals to Roosevelt High School and performance venue to Town Hall, and and officially changed its name to the Thalia Symphony Orchestra. Radcliffe is the founder and Music Director of the New York  Chamber Ensemble, Artistic Director of the  Cape May Music Festival, Principal Guest Conductor of the Hungarian Virtuosi, and Principal Conductor of the Seattle Youth Symphony, the largest organization of its kind in the United States.
Dr. Eric Hanson, 1987-2010
Dr. Eric Hanson has been Director of Instrumental Music at Seattle Pacific University since 1979, and Thalia was privileged to have him at our helm from 1987 to 2010. He has conducted dozens of orchestras across the US and is a frequent guest conductor of the Northwest Mahler Festival. Dr Hanson continues to be a popular lecturer for the Seattle Symphony and is widely known as an eminent Mahler expert.
In 1994, Dr. Hanson negotiated an innovative arrangement in which Thalia Symphony became Orchestra in Residence at Seattle Pacific University. SPU students were able to earn college credit by playing in the  orchestra, and were exposed to a larger, fuller orchestral experience than might otherwise have been available to them. SPU provided generous support including rehearsal space, performance space, and publicity assistance.
Dr. Stanley Chapple, 1977 –  1987
Stanley Chapple’s career is almost legendary. He began conducting at age 19 when he was hired as director of the City of London School Opera. At age 21 he appeared as guest conductor with London Symphony Orchestra. In 1930, the Berlin Philharmonic Orchestra invited him to appear with them as guest conductor, and he quickly became in great demand throughout Europe.
Chapple spent WW2 in the United States, among other things conducting the National Symphony Orchestra. In 1948 he was invited to direct the University of Washington School of Music, where he stayed until he retired in 1971. During the period from 1948 to 1954, he also conducted many of the concerts for the Seattle Symphony . After retirement, Stanley Chapple was far from finished. At the request of the then Mayor of Seattle, he founded the Musicians Emeritus Symphony Orchestra, which continues today as the Seattle Festival Orchestra, and he took the reigns of Thalia Symphony in 1977.
Frances Walton, Associate Conductor, 1954-1977
Thalia Symphony has benefited greatly by the active involvement of Frances Walton, a well-known, excellent amateur pianist and cellist and passionate supporter of music education. During her tenure as Associate Conductor, from 1954 to 1977, she conducted a broad range of symphonic music, including all the Brahms symphonies.  Frances’ accomplishments for the Seattle musical community are immense and included:
Mikael Scheremetiew, 1948-1977
Thalia Symphony was extremely fortunate in the leadership of Mikael Scheremetiew, its founder and first music director from 1949 until his death in 1977. He was an excellent conductor and an innovator. Among other accomplishments: